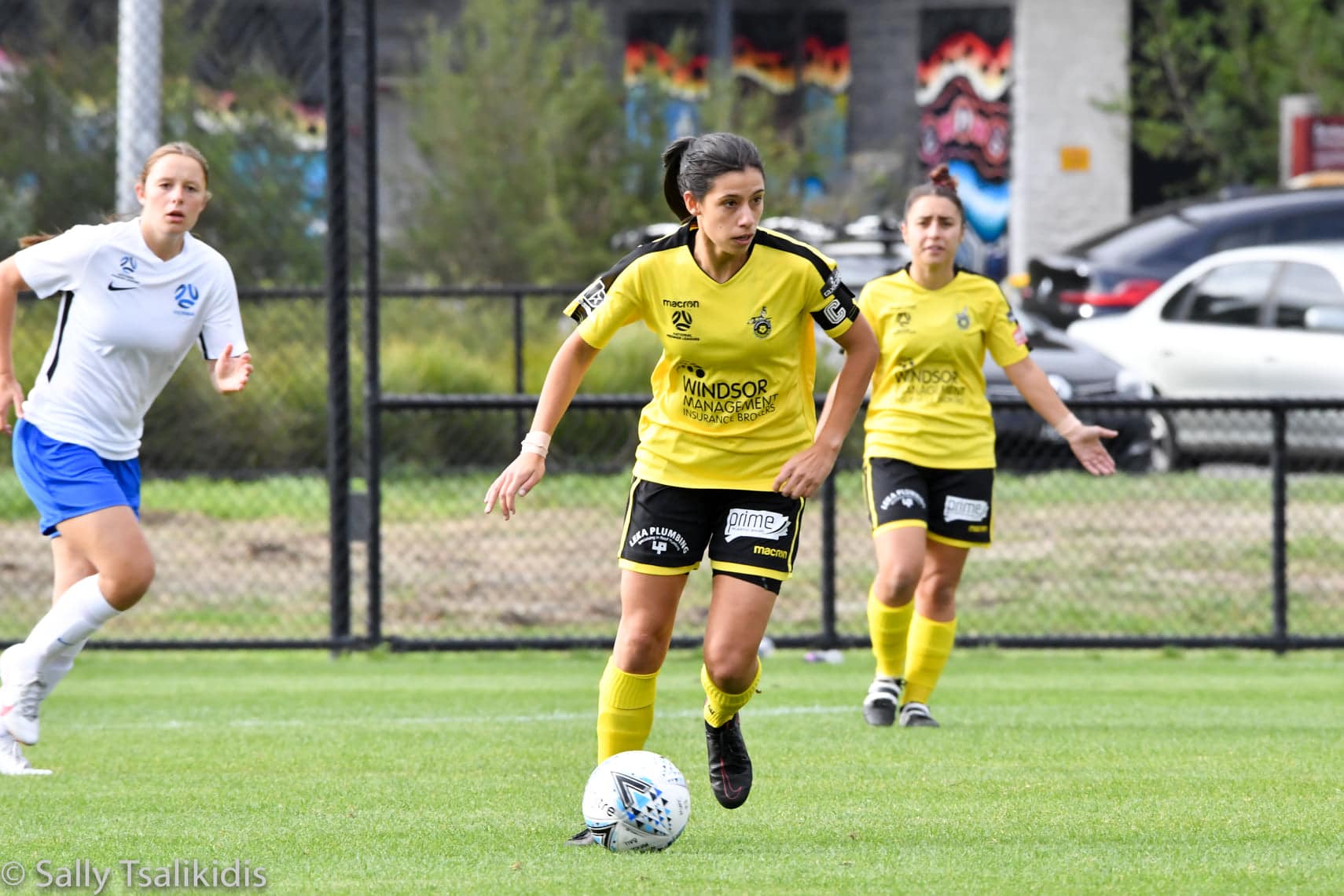 Steph Galea is a perfect paradox. Off-field she exudes that rare and wonderful charm which can make you feel like you are the only person in her company, in even a crowded room. All smiles and joy, the slightly built Galea most often greets her Heidelberg family members with a kind word and a hug. On the paddock, however, the Heidelberg skipper’s smile is more a menacing grimace and her greeting for opponents may well consist of a dropped shoulder and a more robust, full-bodied ‘welcome’ of another kind.

Galea – who belatedly celebrates her 100th game for Heidelberg United this coming weekend – is surely the definitive prototype capable of luring those yet uncommitted into falling in love with the women’s game and the WNPL. She is also, I daresay, a splendid living example of the genuine heart and soul of Alexander. And just as the Warrior faithful have steadily become increasingly enamoured by the gallant women’s captain, Galea has, in turn, been charmed by the romance of her club and its storied history.

Wide-eyed and enthusiastic back in 2015, Galea soon realised that walking through the gates at Catalina Street for the first time meant she was walking into part of history. “When I made the Heidelberg team back at my first training session, I was like, wow, I am going to be playing for Heidelberg this upcoming season,” Galea recalled in this week of her milestone 100th game. “It was a big deal for me, as I knew how big this club was, what it represented, and I honestly couldn’t believe I was going to be part of it”.

“I honestly fell in love with the club the moment I walked in, from the culture to the amazing people involved that help make this club what it is”, Galea explained. “From the first moment I was at the club, I could understand why they called it the ‘People’s Club’. I wanted to be around 7 days a week, so I found any excuse to be at the club. I would attend every club event and every senior men’s game. I wanted to be part of every success the club achieved. I felt part of a community, and it’s somewhere I wanted to spend most my time. It is honestly a home away from home for me”.

Galea’s commitment to Heidelberg United has been unwavering over the journey. Whilst Galea has gone about winning the hearts and minds and respect of every member of the Warrior family, on-field Heidelberg has won nothing of note since the 2016 blitz of Bulleen in the Team App Cup final. As arguably the mightiest Warrior of all, you can’t help feel Galea deserves much richer on-field success. Yet despite her playing years yielding little more than a mix of modest successes and deflating mediocrity, Galea’s commitment to Alexander remains steadfast.

“Through this club”, she declared, “I’ve met the most amazing people and built some of the best friendships. So for me, now it’s not just a club I play for, it’s my family. When I think of Heidelberg, I think of a club with lots of history. But not only as just a football club, but as a community as well. I find these days it’s not too common for players to stick around at one club. They like to move around and seek new challenges. But for me, I wouldn’t want to play anywhere else”.

Galea recalls that 2016 cup victory over Bulleen with great relish. Only she and tiny teammate Elly Torre – the smiling assassin – remain part of the current woman’s program at Heidelberg. That shared 4-0 success helped forge a bond with Torre which remains to this day. “Elly has to be my number one teammate over the years”, says Galea. “She’s been around longer than me and she made me feel welcome and comfortable from the very beginning. She’s the most positive and supporting player I’ve ever played with. I’ve been lucky to have played alongside some terrific people. Belinda Panella and Leigh Gray were players who I always looked up to when I was young, and they are players I learnt so much from. I was privileged to have the opportunity to play with both”.

“I still get goose bumps thinking about that Team App Cup final”, Galea reflected. “Walking out of the tunnel and seeing a whole sea of yellow and black supporters cheering for us. It was very special to share that moment of success with the entire club. The women’s program has definitely taken a positive turn in 2021, especially when we have amazing people like Helen and her female committee who do an amazing job. As well we have our dedicated and committed coaching staff and we are heading in the right direction. We have worked extremely hard to build an amazing culture and foundation to build from and I believe success in the woman’s program is coming very soon”.

As a player, Galea is described variously – by friends and foe alike – as resilient, tough, dynamic, inspirational, aggressive, a great leader and role model, determined, courageous and a clutch player when the chips are down. By every measure she’s a dead set, chisel-it-in-stone champion of this club. Coming off a thrilling rare win over arch-rivals Calder last weekend, the women Warriors now venture way out to Knox to celebrate Galea’s 100th game this weekend. But Heidelberg fans moaning about the drive-time to get to the game against Bayside, think again. I reckon if Galea was asked to crawl to the game, she’d likely take a couple of days of work and do just that. She’s a ripper, so get there and fly the colours for her if you can.

“Yes, it is very special, especially to have achieved this milestone with a club like Heidelberg”, she says of her milestone coming up. “Seeing some of the males and females to have played at this club, it’s pretty amazing. And I want to be around for as long as I can, whether I’m playing or helping coach the junior teams. I get just as excited when I see our junior girl teams win just as much as I do with the seniors. I want to be around to help achieve success at Heidelberg United, not just with the seniors but the whole women’s program”.

While Galea credits Aleks Sinclair from Calder as one who has helped her development as a player and personally, the one particularly special person in her sporting life and who remains her staunchest fan is her dad. “My Dad is a huge influence on me”, she says. “He’s been my number one supporter from day one. You won’t see him miss a game and hail, rain or shine he will be there in the stands with a beer. It means the world to me to share all my football experiences with him”.

As we celebrate Galea’s milestone 100 games, it is worth now considering her place in club history. I wonder whether even Steph herself appreciates the stature in which she is held by the vast Heidelberg United Alexander family. In all her humility, I hope it is not lost on Galea that she is not simply considered an outstanding representative of the woman’s program alone. Indeed, Steph Galea should now be considered nothing less than an icon of this historic club. Galea epitomises everything good about this club and all I can offer is well played Steph, you’re a ripper.

Footnote – Amongst one of my very favourite keepsakes from forty years in the game is a newspaper cutting from goodness knows where, which my daughter had framed for me and is hanging in my hallway at home. It features Steph Galea’s player profile and the question of her five ‘dream dinner gusts’. Featured are Kobe Bryant, David Beckham, Tom Hardy, Christiano Ronaldo and – unbelievably – me. Best accolade ever