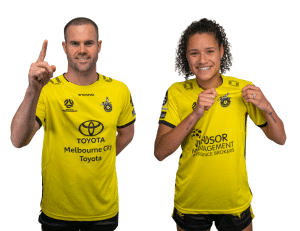 The Heidelberg United Football Club would like to advise all Club Associates and anyone else wishing to participate in or attend matches at Olympic Village, as well as all other FFV sanctioned events, to read and familiarise themselves with the relevant Codes of Conduct/Behaviour and Conditions of Entry.

It is vital that everyone involved in Football, whether they are players, coaches, members, officials, volunteers, parents or spectators, understand their responsibilities to ensure that all participants enjoy the sport in a safe and family friendly environment. Through our affiliation with Football Federation Victoria (FFV), the Heidelberg United Football Club has adopted and continues to promote the FFV’s/FFA specific Codes of Behaviour that must be strictly abided by.  Failure to comply with any of the Codes of Behaviour below, will be met with sanctions, as outlined in the FFV By-Law.

The Heidelberg United Football Club continues to support and promote the FFV’s successful ‘zero tolerance campaign’. This campaign is designed to promote the principles of good sportsmanship and appropriate attitudes. The club encourages everyone to conduct themselves appropriately and respectfully, and to abide by the FFV Rules of Competition (RoC) and the Grievance, Disciplinary and Tribunal By-Law. Behaving inappropriately or any form of behavioral misconduct will not be tolerated and offenders will be dealt with decisively, which may include severe financial penalties, points deductions and even relegations for clubs.

The Victorian Code of Conduct for Community Sport is a generic Code for community sport across the state.  The creation of welcoming and inclusive club environments is critical to the sustainability of football clubs. All football stakeholders need to take a proactive role in creating family friendly environments as well as promoting positive behaviour by players and spectators by showing respect towards all officials, players and spectators. By doing so it will make football environments more appealing, welcoming and inclusive.  The Victorian Code of Conduct for Community Sport outlines behaviours that are expected of every person involved in community sport and active recreation, as well as identifying the types of behaviours that will not be tolerated.

Every person: spectator, player, club member, official, participant, administrator, coach, parent or member of the community involved with the sport, should work to ensure:

1.)    As a member of the Heidelberg United Football Club, I will conduct myself in way which contributes to Heidelberg United events being family-friendly enjoyable experiences for all who attend – this means refraining from engaging in disruptive and/or violent behaviour, foul or abusive language or obscene gestures.

2.)    I will not engage in nor endorse any form of vilification on the basis of race, gender, religion, ethnicity, age or sexuality.

3.) While at Heideleberg United games and events, I will not engage in conduct that could bring the Club or the game into disrepute.

4.) In any forum, including in the media, where I am acting as a Heidelberg United Forum or am identifiable as a Heidelberg Member, I will not engage in conduct that could bring the Club or the game of football into disrepute.

5.) As a Heidelberg United member, I have the right to hold and express robust views about our Club, our Board, Club Management and employees; and our players and team, but I will not display behaviour and language that is abusive or malicious.

6.) Should I breach any of the above conditions of membership, I understand the Club has the right to act in the following ways: