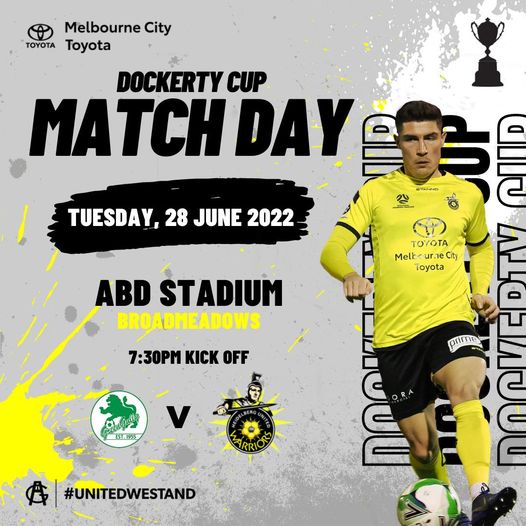 Even a cursory knowledge of basic arithmetic tells us that five into four doesn’t produce a whole number. And, so it goes with the quirky nature of football – one that leads to a playoff match between Green Gully and Heidelberg United on a pre-midweek Tuesday night at a neutral venue (ABD Stadium) – all with the express purpose of determining which of the two will meet Bentleigh Greens in one of the two Dockerty Cup Semi Finals in 2022. All of which is quite the meandering way of labelling it a de facto Quarter Final, if you will.

The two sides are part of a quintet of Victorian NPL clubs to qualify for this season’s Australia Cup – with Oakleigh, Avondale & Bentleigh – Round of 32. However, only four can qualify for the concurrent Dockerty Cup semi-final spots, necessitating the extra playoff game.

Both sides come into the match in fine form, with Green Gully holding league leader South Melbourne to a 0-0 draw at Lakeside last Friday. The ‘Bergers managed another win on the road, with Zahra’s first half strike enough to give his side all three points in a hard fought win at Altona on Saturday evening. And, for all that, it’s fifth versus sixth on the table in an intriguing battle.

Heidelberg United coach George Katsakis is an intensely proud man, and he’ll be aware that Green Gully was the last team to defeat the ‘Bergers. The torrential rain on that late April night at Green Gully Reserve turned out to be a metaphoric dampener for the Warriors, with the Gully recording an emphatic win on the night.

Undefeated since, the ‘Bergers have shown a greater pragmatism and maturity in their performance, during this period displaying a much improved sense of game management. With the lure of possible silverware just three wins away over the next few weeks, the ‘Bergers ad Gully will no doubt pull no punches in what’s certain to be a hotly contested fixture.

The action all kicks off at 7:30PM on Tuesday (June 28), at ABD Stadium in Broadmeadows. HUFC TV will broadcast the game live via the link at www.hufc.com.au