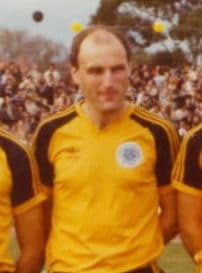 Born in England in 1953, Jim Tansey came to Melbourne where he joined Prahran Slavia in the Victorian State League. He quickly developed as a defender and was the Victorian 1976 Rothmans Gold Medal winner and the Media Best Player. Tansey played for Victoria before gaining Australian selection against the USSR in Melbourne in November 1975. Three years later he was selected for the match against Greece. He toured overseas with the Socceroos and played in the 1982 World Cup campaign. Tansey was selected 41 times for Australia, including 19 A class matches.