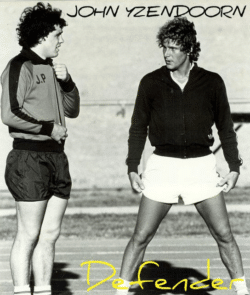 Born in England in 1955, Yzendoorn joined Heidelberg in 1979 playing five seasons. He played in the 1980 team that won the National Soccer League Top 4 Competition.

Yzendoorn made his international debut at the age of 23, when he was selected by Rudi Gutendorf to play in a two-match series against Partizan Belgrade in 1979, where he came on as a substitute in both matches. His first ‘A’ international cap came against Czechoslovakia in 1980, where he again appeared off the bench in the Socceroos 2-2 draw at Olympic Park in Melbourne. He scored his first and only international goal in another 2-2 draw against Mexico in Sydney later that year. In all, Yzendoorn would play 13 ‘A’ international matches for his country, his career ending during Australia’s ill-fated 1982 World Cup qualifying campaign, where he was a key member of the squad which lost at home to New Zealand.