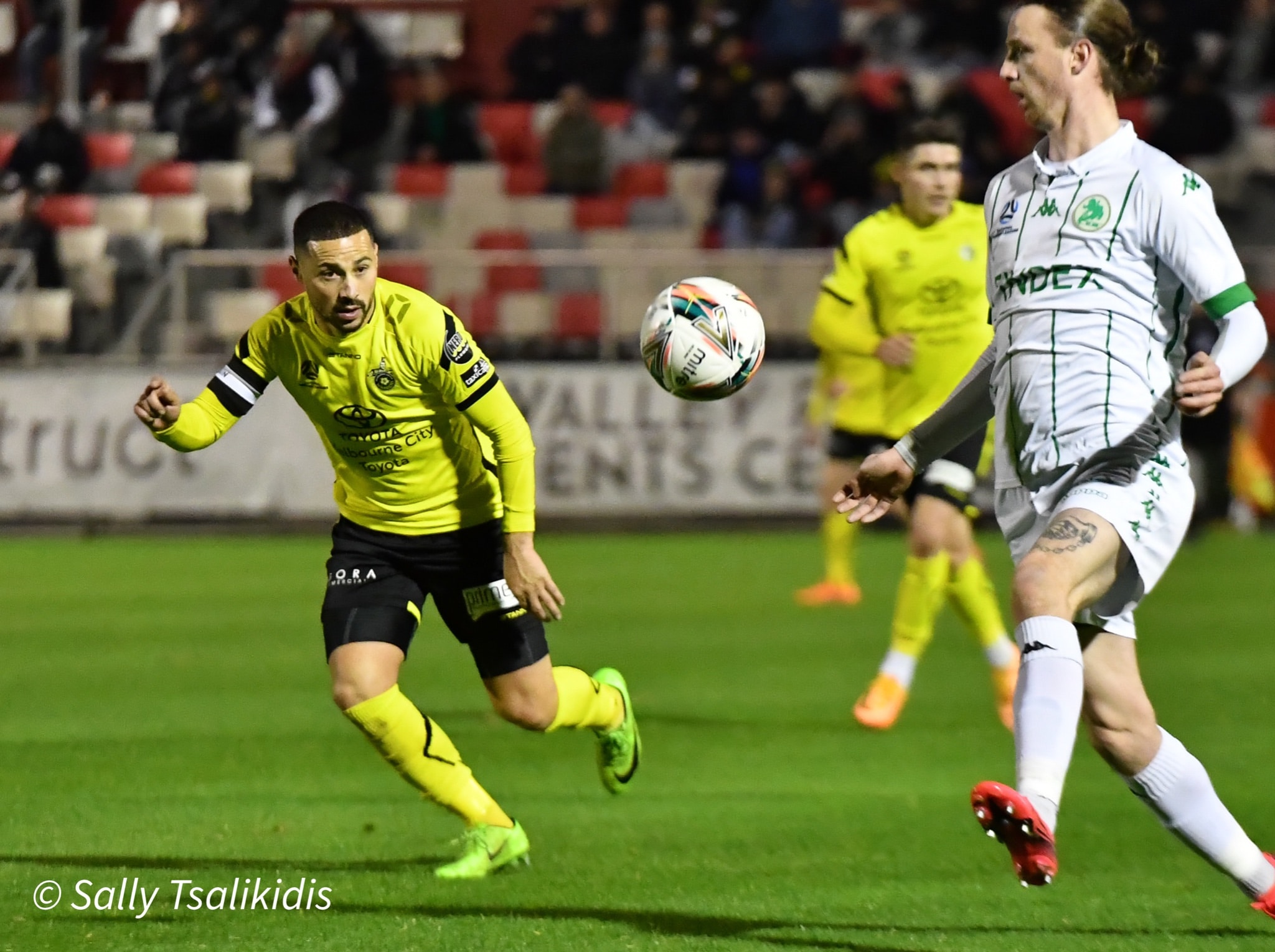 Heidelberg United has booked a Dockerty Cup Semi Final spot against Bentleigh Greens after an action packed and dramatic 3-2 victory against Green Gully at ABD Stadium on Tuesday. The ‘Bergers gave up a two goal advantage, but lifted to grab a late winner, extending their unbeaten run to 11 matches in all competitions.
Zahra gave his side a lead early in the match, converting a spot kick following a foul on Ellis. Gully had a goal disallowed due to an offside decision, with a very delicately poised match seeing the Warriors take a 1-0 lead at the main break.

Ellis got on the end of a Summerskill free kick to flick home, doubling the advantage to the ‘Bergers early in the second half. However, the drama was just beginning to unfold.
De Godoy nudged the ball home following a Gully corner kick, giving his side a foothold back into the match. With both coaches using the substitutes’ bench, partly to counteract fatigue, and partly with upcoming fixtures in mind, the game began to open up.
Green Gully made it 2-2 with a quarter hour to play, with Kamara’s persistence paying off. He squeezed home the equaliser after a combination of Nick Eres and the woodwork had conspired to keep out his initial effort.

The defining moment of the match was provided by Deion Nikoliaidis. The ‘Berger youngster, who has come up through the club’s junior ranks, broke open the match with a daring run to set up Kaine Sheppard. Perhaps instinctively and possessing the audacious confidence of a young player unfettered by the pragmatism of more seasoned colleagues, Nikolaidis sensed his moment and cut a swathe through the Gully defense, before squaring the ball to Sheppard, who had little trouble regaining the lead for the ‘Bergers.
Despite a late scare when Nick Eres produced a point blank save to deny Brookes, Heidelberg United managed to see out the game, with new recruit Kosta Petratos getting some game time and giving ‘Berger fans a promising glimpse of his talent and experience.

After the match, Nikolaidis spoke to HUFC TV about his and the team’s growing confidence, shaking off a slow start to the season.
“Playing each week together, we’re really starting to gel as a unit, and you can see it with the results each week.”
Reflecting on his match winning assist, Nikolaidis commented: “it was just an instinct thing, where I got on to the ball, played it to Anthony (Theodoropoulos), who played it back, and I just ran through, and spotted Kaine (Sheppard) free. I was happy to be able to get it to him, and he did the rest.”

The ‘Bergers will now face Bentleigh Greens in the Dockerty Cup Semi Final at Jack Edwards Reserve in Oakleigh on Tuesday, July 12, at 7:30PM.
However, before then, it’s back to NPL action this Sunday (July 3) at 3:00PM, and another away fixture, with the Round 20 action against St Albans at Churchill Reserve.