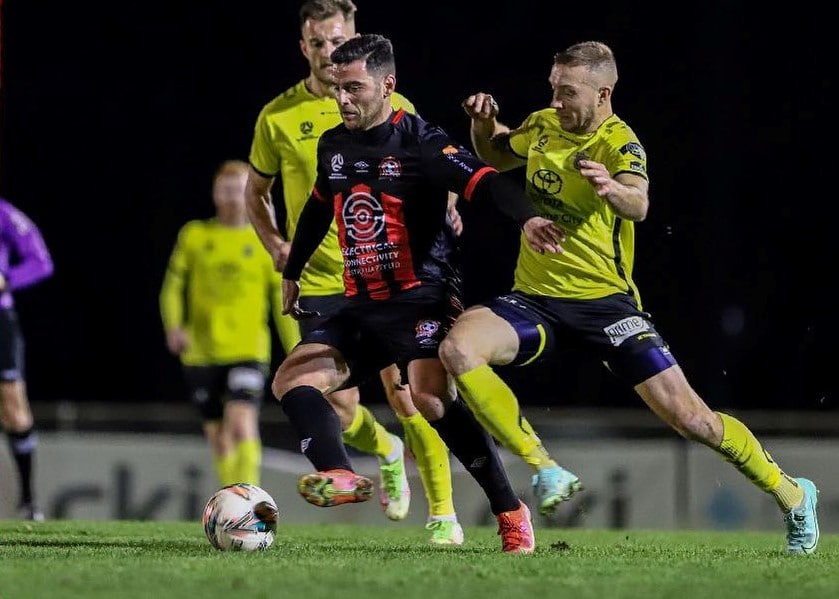 It wasn’t always exactly pretty, and the ‘Bergers were made to scrap until the very end – but the resultant three points solidified a top six spot ahead of a busy week. A superbly taken strike by skipper Adrian Zahra in the first half was enough to give his side another valuable away win in a physical contest against Altona Magic at Paisley Park.

The ‘Bergers were on top for the early part of the match, and were rewarded for their enterprise through Zahra’s clinical strike after 18 minutes. Playing in a defensive role, covering for the inured Ivan Franjic, Zahra volleyed home a left foot shot for the only goal of the game to keep his side in sixth spot.

Both sides might have scored, with the most notable chances of the home side falling to Hatzimouratis and Markovski, and the ‘Bergers through Sean Ellis and Brian Summerskill forcing reflex saves from Oldfield. Despite the home side ramping up the pressure, particularly in the second half, the ‘Berger defence held firm, with ‘keeper Brendan White keeping a clean sheet, his first in the NPL since the 6-0 away win at Dandenong City on Easter Saturday.

The significance of the hard-fought win was not lost on coach George Katsakis, whose fist pumps post-match were a mixture of relief and elation. With another win safely negotiated and the unbeaten run extended to 10 matches, a short turnaround awaits, with a Dockerty Cup fixture on Tuesday night (June 28) at 7:30pm against Green Gully (ironically, the last team to defeat the ‘Bergers) at ABD Stadium in Broadmeadows. The winner will meet Bentleigh Greens in the Semi Final of the local cup competition.